Lessons to Breathe Easier in Fundraising 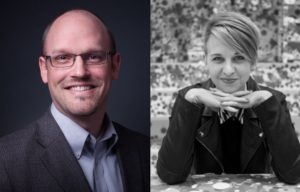 It’s been almost three years since Art Enables began fundraising from its first-ever development plan and the learning in these last couple of years has been intense. The pay-off has been incredible though, as Art Enables ended 2019 raising more than $250,000 above budget!

In this Spotlight on our Spool, we are thrilled to introduce you to Tony Brunswick, Executive Director, and Courtney Smith, Development and Communications Manager, who share their thoughts on what a difference a plan makes.

I breathe easier. Knowing that I’m not 100% responsible for all of our development efforts has made a significant impact on the level of stress and anxiety I felt about this aspect of my role….Having a team, even if it’s just a team of two, has made the work more enjoyable and infinitely more effective.

Thread: What are some of the most important things Art Enables is doing in its fundraising now that it wasn’t doing before expanding its development capacity with dedicated staff?

Tony: Six or seven different things immediately come to mind! I would say, though, that the biggest transformation is that we’re stronger and better at the bookends of fundraising, with donor cultivation and stewardship. We’ve been able to expand our donor pool because we now have the capacity to more effectively research foundation and corporate funding opportunities, while also identifying individuals that may be interested in being a part of our work. At the same time, we’re also doing better at donor stewardship. Additional capacity has meant we’re able to steward donors in ways we just haven’t been able to before, which includes more effective and timely acknowledgments, 1:1 relationship development, and helping donors see and understand the impact of their support on the artists with whom we work.

I’ll also say that we’re just breathing a little easier. Knowing that there is more than one person supporting development efforts eases the anxiety everyone feels – from me, to our Board of Directors, to the rest of our team.

Thread: Tony, how has the way you approach your work as an executive director changed now that you’ve had a development professional on staff for close to two years?

Tony: Since Courtney joined the team, I’ve been able to better focus and lead on Art Enables’ most important organizational priorities. Being able to effectively delegate a lot of the operational aspects of our fundraising has given me new time and bandwidth to attend to other critical priorities across the organization. I also think my leadership of development is more effective. We have a measurable strategy with clearly defined roles, so I’m able to dig into fundraising where I’m needed most and then sit back and support my team where they need it most.

Finally – did I mention this already? – I breathe easier. Knowing that I’m not 100% responsible for all of our development efforts has made a significant impact on the level of stress and anxiety I felt about this aspect of my role. I enjoy development but it’s very hard work. Having a team, even if it’s just a team of two, has made the work more enjoyable and infinitely more effective.

Thread: What systems or actions do you think were most critical to Art Enables’ success in 2019?

Courtney: It wasn’t just one system or action that we took in 2019 that made the difference. Rather, it was the combined effect of doing several things better. For example, our marketing and communications were more robust and consistent in 2019. From newsletters to social media to press releases, we kept it all consistent, informative, and high-quality. So even if individuals didn’t respond to everything, we continually kept Art Enables in their minds. When an ask did roll around, then, our community was more apt to give because we had been a regular and enjoyable presence in their feed.

Thread: Courtney, how has your approach to fundraising and marketing for Art Enables evolved since you began in 2018?

Courtney: I have definitely learned a lot more about stewardship and cultivation. While it would be a treat to ask individuals just once for support and they give right away, that usually is not how it works. You have to work hard to not only earn people’s support, but to keep it as well. My mindset around that has absolutely evolved and grew since I began at Art Enables in 2018.

Thread: What difference does having a development plan make for how Art Enables fundraises?

Thread: What do you credit for the terrific fundraising success you saw in 2019?

Tony and Courtney: In a nutshell, the successes we saw in 2019 can be credited to several things, the two most significant being a strong development plan and the second being consistency in communications and messaging.

Thread: What are you excited for in regard to fundraising in 2020?

Tony and Courtney: In 2020 we are excited to dive into a development plan refresh. It’s been almost three years since we implemented the first Thread-led development plan, and now we are going to take a deep look into our failures and successes, reevaluate our current plan, and give it all a big refresh. It’s important to us that we continue to evolve and keep learning what works and doesn’t work for us.