Falling Into a Great Fit 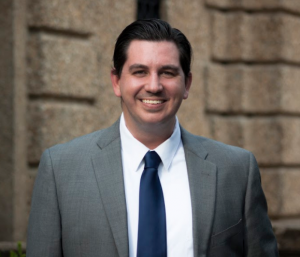 A conversation with William Ross, Development Manager at Reach, Incorporated

Thread began working with Reach, Incorporated in December of 2016 when Reach was ready to add a new development staff member to the team. Before jumping into posting a position, Reach wanted to be thoughtful and strategic about what exactly this position looked like and what experience would be the best fit. Reach leadership also had the foresight to know that a new team member can only be successful when there are systems and processes in place, and tools available, to support their work. Thread was proud to partner with Reach to build this foundation, as well as support the hiring process that brought William Ross to the Reach team as their Development Manager. William started working at Reach in July 2017. Now 6-months into his role, William shares his reflections on his first development position in hopes of helping others transition to the field.

“In my opinion, having people there who have your back while you grow as a professional is priceless.“

William: I’m not sure I would say that I “chose” development, but more that I stumbled into the role of fundraising.  While working as the manager of operations for a for-profit company, I found myself not entirely satisfied with the work I was doing or the trajectory my career was taking.  I wasn’t content with the only end-goal being “make the company as much money as possible” and I realized that I wanted more out of my professional life.  Upon realizing this, I targeted my job search to nonprofit-specific job boards and forums because I knew that I wanted to fight for a cause that was more fundamental than “make money”.  I had experience in sales, account management, client relations, and operational oversight and I thought that these would translate well into a development role, as it’s a position that requires one to wear multiple hats.  Mark [Reach’s Executive Director] must’ve agreed with me on at least some of those things, as, here I am.

William: I enjoy that there is a fundamental purpose to what we do.  I imagine that for the large majority of the working population, there are aspects of a person’s job that they enjoy and other tasks that just get done because they need to be completed.  Having an underlying reason of “why” we do what we do makes my job very fulfilling.  I don’t think anyone finds great joy in laminating hundreds of notecards, but when you know that it is a step in the process to build the curriculum required to teach children, it makes it worthwhile.

I’ve always enjoyed doing research.  Working in fundraising allows me to do research on organizations similar to Reach.  I look into things such as their stewardship practices, how events are managed, and where funding comes from.  I find it fun to dig into potential board connections or find a crossroad within two people’s networks that could get us an “in”.  I’m excited to build on these skills and use them to put Reach in a position for continued success.

I love the youth, both elementary and high school.  I joined Reach during the tail end of our 2017 Summer Leadership Academy and was blown away by our young people’s energy and their ability to understand that Reach is intended to put them in a position for success as they grow while still allowing them being kids.  A lot of the students we serve have grown up with socioeconomic hurdles that I never experienced and seeing them overcome challenges, keep their head in the game, and still show up for work is inspiring, to say the least.

William: Thread.  I have never started a position where there was a team ready to help me get on my feet from day one.  It’s comforting to know that I’m not in this alone and that the Thread team is always available for an ear to bend or advice to share from past experiences.  Being new to both fundraising and working inside of a nonprofit, there were so many things that I didn’t know as I started.  I remember during my first week at Reach, I was searching the internet for fundraising and stewardship strategies, just to get an idea of where my head should be.  Loree saw what I was doing, gave me praise for the ambition, but promptly let me know that Thread could provide the information I was searching for and would be happy to sit down and review it directly.  In my opinion, having people there who have your back while you grow as a professional is priceless.

Mark Hecker.  Before entering the nonprofit world, I heard from peers and read articles about nonprofit horror stories.  I learned about organizations that ran in a perpetual state of organized chaos, and sometimes – just chaos.  From my interviews with Mark, I didn’t get the sense that this would be the case with Reach, but I was a little apprehensive.  My worries quickly dissolved when I started and I realized that Mark is one of the best leaders I had ever met.  He’s realistic, kind, and extremely smart.  He manages to wear fifteen different hats while still running a smooth operation.  Yes, there are hiccups and yes, things come out of left-field, but when systems are in place and there is someone at the helm who has a calm head on their shoulders, all problems can be solved.  He has helped me grow as a part of the Reach family, and I’m very excited to continue to develop as a professional under his guidance.

William: As someone just starting out, I would say it is imperative to be in constant “sponge mode”.  Sign up for other organization’s newsletters and see what their donor communications practices look like.  Talk to your Executive Director and ask them to help set up meetings with Development Managers/Directors at other organizations.  Attend any and all free webinars on fundraising and donor stewardship.  Join online forums.  Actively consume information.  As Loree with Thread told me, there is no college major for nonprofit fundraising.  The only way to grow as a fundraiser is to learn from those who have done it before, adapt their advice to align with your goals, learn from mistakes and build on what is successful.  The entire nonprofit fundraising profession is a giant test lab for seeing what works.  It’s also a test lab that has had to adapt as we as a society have become more reliant on technology.  Twenty years ago, fundraisers weren’t concerned with tracking URL clicks on a solicitation email; now, it is very valuable information.  Also, and this is very important, have fun with it and enjoy what you do.  You’re there to make the organization bigger, stronger, and more effective.  That’s the goal.  Now all we have to do in development is define how we reach that goal.  I find that a very enjoyable challenge.